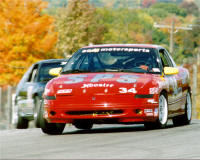 November 23 - Greg writes: Oh, you're still reading this...? Oops, sorry 'bout that. Yeah, I know: no updates since May. Why? Well, as you'll note here in a moment I didn't do much racing, and I can't seem to pry any kind of race reports out of the other guys, so...Well, here's the year's synopsis, based on what I know. If I can get those other losers to write stuff to post here, I'll certainly post it...

- Jeff Lawton. Won a few races this year. Don't remember which ones. Got serious "NARRC Fever" but finished second to Bettencourt in the Miata. Bettencourt and said Miata also broke the NX's 3-yr-old NHMS long-course record, but since they didn't run the short course this year that one still stands.

- Joe DiMinno. Won a few races this year. Don't remember which ones. Did an notable job at the IT Fest, best non-CRX finisher. Actually ran faster than the NX's Watkins Glen Long Course record, but that record was beat that same race by Marc Cefalo in a Miata (noticing a trend here? See below). Said Miata also beat the NX's short-course Watkins Glen lap record. Both DiMinno and Cefalo did admirable jobs at the ARRC, with Cefalo in third and Joe fourth, foreshadowing my long-held prophecies for the 1.8L Miata in ITA...

- Jeremy Billiel. Big "Fale". Jeremy and I took the Suzuki Swift GTi to Pocono in May, hoping to get a couple of good races in. Didn't. The car overheated with me driving; we thought it would last for Jeremy's race. Didn't. A couple laps from the end on Saturday's race Jeremy pulled off the track, car had no water in the cooling system, and a large crack across the back of the block. That was the extent of Billiel's racing year...

Well, I must say it wasn't a TOTAL fail: congrats to Jeremy and Stephanie for the birth of their first son, Caleb! We're all looking forward to teaching "Cale" the fine arts of drivin' race cars, drinkin' Yuengling beer, and falin' at motorsports.

- And then there's me. Even bigger "fale"? As if buying the car in the first place wasn't "fale" enough, I started the year with it at NHMS, which promptly ended with sheared flywheel bolts (?!?!?). Then after blowin' it up it at Pocono, I bought a used street Suzuki Swift GTi to pull the engine from, and Jeremy and I swapped that into the race car. I then took the car back to NHMS in June...and promptly over-heated it. I drove it straight into the trailer and called Billiel, telling him to make it go away. He did; he shipped it to an autocrosser in South Dakota...so I guess it wasn't a total "fale"...

But, even though I was scheduled to drive Pablo the GTI at IT Fest this year, the car wasn't ready so I made the trek via Grumman Tiger to act as a spectator; I found I really sucked at that activity.

On the bright side, right about that time I got a call from A.J. Nealey, asking me to support him in his Volkswagen Jetta TDI Cup effort. I gladly agreed and spent the next couple months traveling with AJ to Road America (ALMS), Mosport, New Jersey, and Road Atlanta (Petite LeMans weekend!) I enjoyed the experience and am very impressed with AJ and the TDI Cup series. Normally I don't, but this time I wish I was 23 again, the series is that good...<shrug> So, I guess I can certainly say the year wasn't a complete failure...and the Tiger flight back from Road Atlanta with Jeff Underwood and Jake Gulick was a treat.

As for the enduro efforts this year, we didn't run the Summit 12 Hours at the Point. The economy being what it is, we could not fill the four-seat line-up in time to coordinate efforts, so we bailed on the project. We did, however, decide to go forward for the 13 Hours at VIR with only three drivers (though we were still looking for another butt to fill that seat up to the last minute). That one, however, also didn't go well: our only competition broke their engine during qualifying, and we failed a shift linkage in the Friday night practice session. Then roughly halfway into the Saturday race we failed yet another half-shaft. Without sufficient replacements we called it a night. The only bright spot is that we finished more than half the time, so technically it was logged as a "win"...

Kirk and I also gave a shot at the ARRC 3-hour enduro. I put the car 1/10 of a second off the race pole (beat by a Mazda Protégé with a monster engine), the first time I've driven that car (or, for that matter, any car in the last 18 years other than the NX2000) at Road Atlanta. We started the race with a full-up tank of fuel (25 gallons, enough for the whole race, so we didn't have to deal with refueling). I started out "ok", though lagging a bit, and 1/3 way into the race I handed it to Kirk. A few laps later Kirk was back in...complaining of transaxle trouble. It soon became apparent that the problem was internal to the borrowed trans ("borrowed" because the trans that the car showed up with was swapped out before the ARRC Sprint race...because of failure) so we parked it. Another "fale"... But, it was fun to be at the event, nonetheless.

I'm sorry, what's that? Oh, the Miata? Yeah, I did, I bought a 1.8L Miata. It has become glaringly apparent that despite my requests, and despite what I consider obvious support, SCCA will not adjust the weights of the 1.8L Miata in ITA to a level I feel it should have. I firmly believe that car will be the dominant vehicle in the class. So, what's the old saying? "If you can't beat 'em...?" So...I'm joinin' 'em. There's no rush on the project; finishing the Integra build is the first priority and unless SCCA does something drastic - and I don't see that happening any time soon - we've got plenty of time.

And what of that Integra, you ask? Well, nothing, really. That car is basically in the same condition, almost the same place on the shop floor, as it was back in January. That being: stripped, cleaned up, the cage about 98% done, with engine parts scattered on the bench and major engine parts still awaiting machine work. In other words, still a project. Yes, we're going to finish it and put it on the track, the goal being the start of 2010. Then we'll build the Miata, and eventually decide which one to keep...

OK, so winter's moving in (the skies outside my windows are bleak and leaky as I type). We're all settling in for the holidays, trying to think about what we need to do to be ready in April. Some highlights will include more National racing in STU, as SCCA has decided all classes will be invited to the Runoffs at Road America (LOVE that track); we might turn this into an IT Festival. I also expect to see more Marc Cefalo improvements in that Miata as the year progresses, and I expect to see both Joe and Jeff in their respective rides in ITA. Jeremy will no doubt try to sneak in a couple races to keep his license.

Other than that? Well, I'll have another beer, thanks.

May 9-10 - Lawton dominates the Pocono Double!

May 2-3 - Kakashi starts the season with a big "fale", losing the flywheel off the Suzuki after 6 laps...nice while it lasted, though...

April - Lawton pulls out a strong second place, even when coming from the tail end!

April - How is it that these weird, oddball cars tend to find Greg? Or, is it the other way around...? Yes, he did.

March - Greg agrees to drive Pablo the ITB Golf GTi at the IT Fest at Mid-Ohio, the VIR 13 Hours, and at the ARRC at Road Atlanta. Details to follow...

March - Welcome to 2009! Yeah, yeah, I know: it's almost three months old now. So I've been lazy, get over it <grin>. Actually, it's been a snowier-than-lately Winter; I sincerely think I've spent more time on my snow blower-equipped lawn tractor than I did in racing last year! Anyone have the sanction numbers on that...?

Speaking of last year: wow. DiMinno finally wins a championship, Lawton really comes to the fore in that Saturn, and I...well, I destroyed our ITS Integra. More accurately, I should say "Jeremy's ITS Integra" 'cause even though we're partners he built it from scratch. But, that's how racing goes...

I've initially called 2009 as "What, all over again???" It seems the team is beginning to feel a bit of "racing ennui" this year. This is likely due to a number of factors: first, of course, there's the economy. While most of Kakashi is still gainfully employed as before, there's just no way that the country's malaise won't spill over. Add to that a general uncertainty to future employment and I think we're all being cautious and conservative with time and money. Despite that, Jeremy, Matt, and I have the new Integra chassis caged, the old chassis stripped, and most of the parts ready to go in, I guess we're just looking for a healthy dose of good weather and motivation. Joe is taking his good-ole-time on having a replacement engine built (you may recall he grenaded his last one at WGI in September) but as always we expect him to pull it together last-minute. Tim is being distracted by pending nuptials and some employment difficulties, thus the NX's ills have yet to be addressed. I guess that leaves Jeff in a strong position, champing at the bit to get going. In fact, I'd not be surprised to hear that he's in his truck right now, with it idling and ready to go to NHMS next month...<grin>.

We don't have a real sense yet of what's in store for '09, but generally speaking it'll probably "more of the same". Jeff and Joe will probably beat up each other in pursuit of the NARRC championship. Jeremy and his wife Stephanie are expecting a new addition to the family in July, so he will likely be distracted for most of the year (congrats dude! But you need to plan that stuff for the off-season!) If we can get the Integra built I have ideas to attend both the IT Fest, the ARRC, some of the Pro IT series, and a few key local events. Matt, of course, will be busting his ass building and prepping IT and SM race cars, and with his new DynaPack likely a whole lotta tuning.

So, we'll see. I detect another transition year, a la 2005, but I'm someone will come out with fists in the air soon enough.